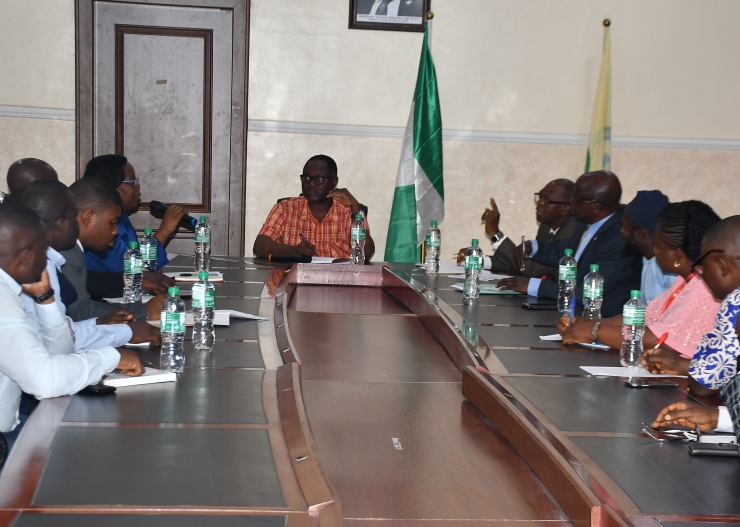 The Management of Osun State University has finalized preparations to access the Tertiary Institution Poultry Revival Scheme (TIPReS) initiated by the Central Bank of Nigeria (CBN), with the aim of boosting local production and processing of poultry products of tertiary institutions with commercial farms.

The Vice-Chancellor, Professor 'Ayo Clement Adebooye revealed this in a meeting held with delegates from CBN and the University's participating financial institution on Tuesday, 2nd August, 2022.
It will be recalled that the CBN delegation visited the University earlier in May to introduce the scheme to Management, and Management had expressed interest in accessing the loan but promised to relay feedback to the team of development finance officers after making recommendations to the Governing Council.
Addressing the delegation, the Vice-Chancellor stated that the Governing Council had given the University a go-ahead to access the loan. He stated "Council at its meeting on 23rd June, 2022 approved that the University should access the loan, and gave a ceiling of N170,000,000 for the first batch, which would be revisited and increased upon evidence of performance of the first instalment. We have filled out the expression of interest form, and attached feasibility document along with other necessary documents as we are keen to kick-start the process and fast-track the application modalities."
The Vice-Chancellor also said that the University's commercial farm had been planning to procure five thousand (5,000) layer birds, with sixteen (16) weeks point-of-lay and six thousand (6,000) day-old broilers from the loan.
The Head, Development Finance Office, CBN Osogbo branch, Mrs. Oluyemisi Adebayo, who led the delegation commended the decision of the Governing Council and the initiative of the Management on the need to access the loan scheme. She assured Management that the CBN would ensure prompt processing and release of funds as soon as the University completes and submits its application.