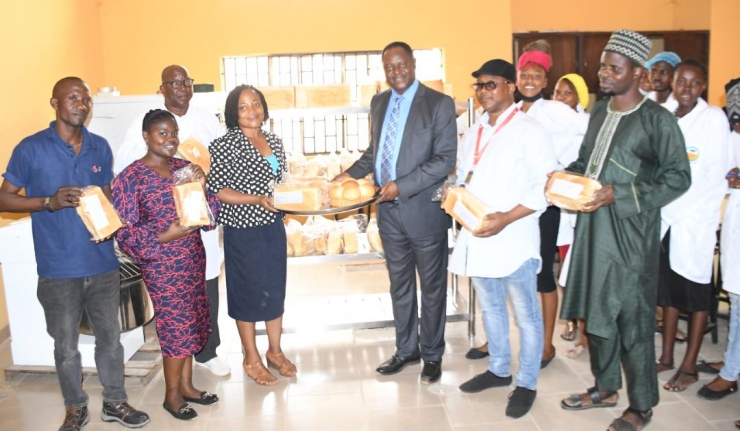 ...As VC visits production workshop, expresses satisfaction with the quality.

After basking in the euphoria of the success recorded by UNIOSUN Water as the preferred choice of the populace, the Department of Food Science and Technology of Osun State University on Thursday, 23rd day of February, 2022 launched its bakery products with its base of operations stationed on the University main campus in Osogbo.

It would be recalled that the Department of Food Science and Technology received funding from the University Management to purchase a bakery line comprising of a three-layer industrial oven, 25kg capacity dough mixer, bread slicer and stainless steel working platforms. These items were procured with the aim of exposing her students to the practical aspects of baking and mixing as unit operations in food processing, as well as equipping them with hands-on experience that can set them up financially in the future.

The Vice-Chancellor of Osun State University, Professor Odunayo Clement Adebooye while at the site commended the Department for its efforts towards contributing to the University IGR and also expressed his satisfaction with the quality of bread produced.

"I am very impressed to note that a new department as yours has devised a way to contribute to the Internally Generated Revenue (IGR) of this University. It shows that you're not only instilling the spirit of entrepreneurship into your students, but also throwing down the gauntlet for other departments.

"I can see plain white bread and pan loaves before me, and I just had a taste of one of the loaves produced. I must confess that after taking a bite, my taste buds are extremely satisfied with the quality," Professor Adebooye added.

The Acting Head of Department, Dr. Adedayo Adeboye in her reaction to the Vice-Chancellor's remark stated that the vision of the baking line is to develop process lines for value-added (diet-specific nutrient-dense) baked goods to meet the immediate culinary needs of the University Community in particular and the general society at large. She also revealed that more culinary products shall be rolled out by the Department as the top management of the department is currently working on the modalities of the mass production.